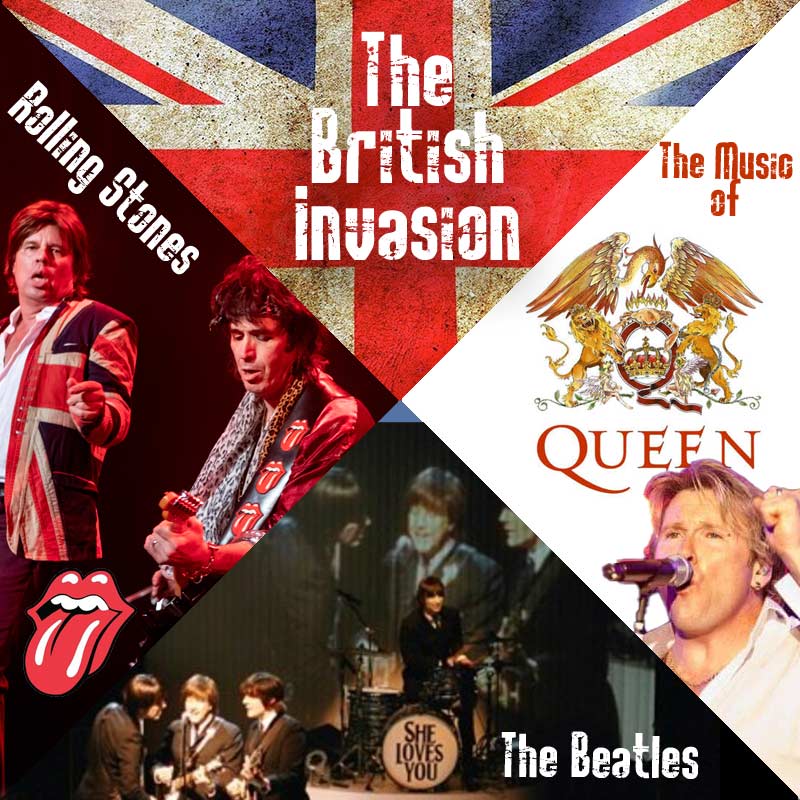 The British Invasion started in the 60’s and carried right on through generation after generation. From The Beatles to Queen, Bowie & Elton to The Rolling Stones, the music of Britain was the most popular yesterday and today.

Join various artists as they recreate the British Invasion sounds and sights in this spectacular production show, including music of The Beatles, The Rolling Stones and Queen.

You’ll be dancing in your seat and singing along to the music you love.

The revue, complete with strobes, swirling smoke and motorized spots, covers the period from 1964, when The Beatles first set foot on American shores to appear on the Ed Sullivan Show (for those old enough to remember, the sight of the stiff, wooden-faced Sullivan up on the screen evokes fond memories of the ritual of sitting in your jammies, open-mouthed, in front of a 13-inch TV screen on a Sunday evening to watch Sullivan’s parade of comedians, acrobats, pop stars, opera divas, puppeteers and ventriloquists) to 1969, when the country was being torn apart by race riots, assassinations and war protests.

In song after song, amped to the nth-degree, the quartet, which consists of Alan LeBoeuf as Paul, David Leon as John, Josh Brosnan as George and Carmine Grippo as Ringo, captures both the sound and the spirit of a cultural phenomenon that changed the face of the music business.

The Rolling Stones Tribute Show! – Immerse yourself in the hits, the look, the feel, the sound, and the excitement of a Rolling Stones concert!  With their costumes, stage personas and performance, this is the next best thing to seeing the Rolling Stones live!

With over 50 years of Stones hits, from Ruby Tuesday, and Jumping Jack Flash to Start Me Up, there’s a favourite song for everyone.  For Rolling Stones fans of all ages this will be a show to catch, and will definitely get you “Satisfaction”!

Who doesn’t love the Queen’s of Rock n’ Roll.

The band’s 1977 album contained “We Will Rock You” and “We Are the Champions”, which have become Stadium anthems at sporting events. By the early 1980s, Queen were one of the biggest stadium rock bands in the world. “Another One Bites the Dust” from “The Game” (1980) became their best-selling single, while their 1981 compilation album Greatest Hits is the best-selling album in the UK and is certified nine times platinum in the US. Their performance at the 1985 concert is ranked among the greatest in rock history by various publications.

Join vocalist Michael Shotton (Jeans and Classics) as he sings the classic Queen songs we all love to hear.